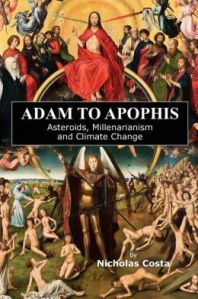 Adam to Apophis- Asteroids, Millenarianism, and Climate Change by Nicholas Costa. Now available on Amazon, Barnes and Noble and other good booksellers.

Is there any substance to the long held claims that at some point in the future there will be a major ‘end time’ phase, culminating in world-wide catastrophes caused by the fragmentation of a comet or near earth asteroid?

An asteroid exploding in the Earth’s upper atmosphere needn’t be seen or heard by anybody Nobody need be killed nor an impact crater left behind. Depending on its size the explosion can be equivalent to the simultaneous detonation of numerous atomic bombs that can make these man-made weapons pall into insignificance. The initial impact of such events upon the earth’s ecosystem due to the resultant atmospheric pollution can be enormous causing major shifts in weather patterns resultant in freak weather worldwide and concomitant shifts in terrestrial seismicity.

According to astronomers since c1990 the earth entered a region of space littered with a greater number of rocks and debris leading therefore to a much greater impact probability with the earth than any time in the last 1400-1500 years.

According to the historical record what we are now witnessing is not just the by product of our senseless exploitation of the earth’s resources, and if the records are correct there is far worse to come…

Who or what were Adam, Noah, and Elijah? Where they real or imaginary? What exactly was Creation? Did something really happen sometime around 4,000 BC as the Bible tells us?
What exactly was leprosy?
Why is the Islamic world in turmoil after centuries of quiescence? Are the mass uprisings democratic movements against tyrannical regimes, or fanatical drives to promote the spread of Islam, or is there something else far more sinister at play?
Adam to Apophis provides answers to all of these questions.
For millennia major religions have held the unflinching belief that at some future point the world will once more enter an ‘end time’ phase. According to Islamic, Hindu, Buddhist, Jewish, and Mayan reckoning that ‘end time’ phase is this current century. Christianity also holds the same belief.
During such phases the earth has been subjected to airbursts and meteoric impacts which in turn have spawned decades long sequences of major environmental traumas in the form of extreme weather, volcanic eruptions, massive earthquakes, and tsunamis. This ‘future’ phase is itself part of a larger cycle to which the Earth has been subjected a number of times during the past 6,000 years, resulting each time in worldwide societal collapse.
Religious or mythological texts exist which feature fantastic creatures and long lived superhuman beings. The records have been fastidiously preserved for millennia. Jewish and Chinese texts have preserved associated chronologies. However these ancient chronologies have been repeatedly discounted or ignored by modern scholarship.
In the past few decades science has built up its own independent chronology of the earth’s recent past by means of dendrochronology, ice cores, ice rafting, sedimentology, volcanology and astronomical retro calculations. These now provide us with a tangible record of climatic and terrestrial traumas stretching back thousands of years.
At first sight the two disciplines would appear to be in total opposition- the one seemingly relying on ‘faith’ and ‘fabricated’ evidence, and the other on scientific reason and hard fact. Given therefore the seeming polarity one would therefore expect to find little if any synchronicity between the two. What happens if we overlay the templates?
Modern science has recently discovered an important earthly traumatic cycle know as Bond Events which occur every 1400-1500 years. The religious texts also clearly display knowledge of this cycle. Islam for example holds the belief that it will only last some 1400-1500 years.
Adam to Apophis demonstrates that the concept of millenarianism is no idle fantasy but ultimately rests upon a firm foundation of real physical traumas.
The book traces this primary cycle in stages back from the present day to:
Bond Event 1: the advent of Islam in the 6th century AD when there was massive terrestrial and social upheaval worldwide.
Bond Event 2: the 9th century BC where we discover the same pattern. In the Bible this is represented by the Elijah cycle of stories which focus upon a hitherto unidentified massive volcanic eruption in Arabia, but with clear evidence from regions as far afield as China that the trauma was worldwide.
Bond Event 3: Noah’s Flood, his true identity and the real location of the ‘Ark’ -still a major religious site comprising the largest cemetery in the world with millions of bodies buried there. The identities of the Chinese Emperors Yao, Shun, and Yu and a second impact site.
The Piora Oscillation: Death of Adam. The Nephilim. The Chinese Flame Emperors. The Mahabharata and Krishna
Bond Event 4/ 5.9 Kiloyear Event: The true nature of ‘Creation’, the identity of Adam, the Ramayana and the Burckle Crater

Adam to Apophis is an original and compelling work. It will be of indispensable interest not only to scientists and academics in a variety of disciplines, but also to the layman of whatever or no religious persuasion.